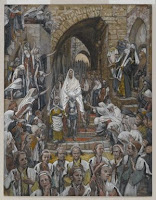 Today’s #LentArt post is James Tissot’s “The Procession in the Streets of Jerusalem” or strictly speaking “Le cortège dans les rues de Jérusalem”, from the Brooklyn Museum. It’s a relatively straightforward rendering of story of Jesus entering into Jerusalem on what has become known as “Palm Sunday” because of the Palm leaves that we are told the crowd were waving and which we see in the hands of those following Jesus through the archway into the streets of Jerusalem in the picture. However, palm leaves don’t actually get a mention in the account from Matthew’s Gospel which is the reading in the lectionary for today:

As they approached Jerusalem and came to Bethphage on the Mount of Olives, Jesus sent two disciples, saying to them, “Go to the village ahead of you, and at once you will find a donkey tied there, with her colt by her. Untie them and bring them to me. If anyone says anything to you, say that the Lord needs them, and he will send them right away.”
This took place to fulfill what was spoken through the prophet:
“Say to Daughter Zion,
‘See, your king comes to you, gentle and riding on a donkey, and on a colt, the foal of a donkey.’”
The disciples went and did as Jesus had instructed them. They brought the donkey and the colt and placed their cloaks on them for Jesus to sit on. A very large crowd spread their cloaks on the road, while others cut branches from the trees and spread them on the road. 9 The crowds that went ahead of him and those that followed shouted,
“Hosanna to the Son of David!”
“Blessed is he who comes in the name of the Lord!”
“Hosanna in the highest heaven!”
When Jesus entered Jerusalem, the whole city was stirred and asked, “Who is this?”
The crowds answered, “This is Jesus, the prophet from Nazareth in Galilee.”

Its actually only John’s Gospel that mentions palm branches, and others who know more about the geography and botany of the middle east than I do tell me that at the time of Jesus there would have been no palm trees in the vicinity of Jerusalem. They would have been brought along by the disciples and other pilgrims from Jericho and elsewhere, as props, together with the donkey, to complete the dramatic reconstruction of the psalms and prophecies that were taken to refer to the longed-for Messiah.

This was a “staged” event… A procession organised to make a point… a point with religious and political overtones. And that point is not missed by the religious officials on the right of this picture, which in itself seems quite staged.

This country of ours is quite familiar with the idea of processions that make political and religious points. Indeed usually the week after Easter marks what is often referred to as “marching season.” But because of covid-19 such marches are suspended until further notice.

In thinking about the French title of the picture,“Le cortège dans les rues de Jérusalem” I remembered that in English we usually reserve the term cortège for the context of funerals, and like other processions, funeral cortèges have been suspended too… and other arrangements for funerals have now been even more strictly curtailed.
But whatever political point Jesus’ followers thought they were making, Jesus was aware that he was actually subverting it. There was perhaps in his mind more of a sense of this being the beginnings of a funeral cortège rather than a political procession, as Henry Hart Milman’s hymn puts it:
“Ride on, ride on in majesty,
in lowly pomp ride on to die.”
Today’s celebration of Palm Sunday in churches have also been suspended, with online services being offered instead as they have been for the past few weeks. The Good Friday walks of witness that frequently take place have also be suspended.

But that direction of travel from Palm Sunday to Good Friday and beyond continues all the same… It’s just that this year, the shocking contrast between the optimism of Palm Sunday and the depths of despair on Good Friday are perhaps not so stark…

The streets of Jerusalem are probably as empty as the streets of Belfast.
There is little excuse for palm waving celebration.
Yet are we any clearer than the crowds on that first Palm Sunday were about what actually lies ahead?

Perhaps those in authority have a clearer (and perhaps grimmer) idea, like those in this picture.

But our celebration is not based upon an idea that we follow someone who is riding into the city to make everything alright with the wave of his hand (if not the waving of a palm branch), but that we follow Jesus who shared all our sorrows. And continues to do so.

O God our hope,
today we remember that when Jesus entered the city of Jerusalem the people shouted hosannas and proclaimed him as king.
Help us to honour him every day, choose him as our leader, and follow him in the way of the cross.
May your Spirit bring us a sense of calm and peace in the unknown and difficult times ahead.

We pray for the world’s leaders, that you might give them wisdom and compassion as they plot the way ahead.
We pray for your church in this time of uncertainty, that we might offer hope and love to those who feel frightened and alone.
We pray for those people who are worried about leaving their homes and those who cannot.
We pray for those needing to make decisions in order to care for others.
We pray fe pray for carers, doctors and nurses and others in essential jobs.
Holy God, present with us now,
guide us in all we do and say that it might reflect your love for the world,
through Jesus Christ, our Lord. Amen
Selah