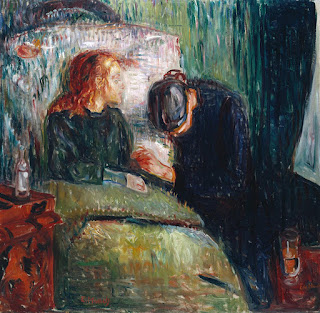 Today’s #LentArt post is once again prompted by the Psalm in the Daily Lectionary, and we also hope to use a version of it as a call to worship for our online service this coming Sunday, a particularly appropriate one for the current climate:
Out of the depths I cry to you, Lord; Lord, hear my voice.
Let your ears be attentive to my cry for mercy.
If you, Lord, kept a record of sins, Lord, who could stand?
But with you there is forgiveness, so that we can, with reverence, serve you.
I wait for the Lord, my whole being waits, and in his word I put my hope.
I wait for the Lord more than watchmen wait for the morning,
more than watchmen wait for the morning.
Israel, put your hope in the Lord, for with the Lord is unfailing love and with him is full redemption.
He himself will redeem Israel from all their sins.
Psalm 130 (NIV)
This Psalm has a personal resonance for me, as one that I have returned to on a number of times in periods of depression, when I genuinely felt I was in the depths and unable to climb out by my own strength, therefore I was reliant on God reaching down to haul me out.
This painting. “The Sick Child” by Edvard Munch also speaks to me of someone deep down in the depths. It apparently draws upon Munch’s memory of his older sister Johanne Sophie’s death from tuberculosis at the age of fifteen in 1877, with Munch himself nearly dying from the same dreaded disease, for which, at that time, there was little by way of treatment bar isolation. Ten years after her death Munch worked on the painting for a year, with art commentators suggesting that the rapid brushwork and vivid colour evident in the painting implies the painful evocation of a traumatic memory. Much himself suggests that ‘It was a breakthrough in my art’, and that ‘Most of what I have done since had its birth in this picture’. But it is interesting that he completed six oil paintings and many studies of the same scene as lithographs, drypoints and etchings, over a period of more than 40 years (indeed the picture here dating from 1907 is subtly different from the earlier on I posted this morning). The girl, assumed to be Sophie is typically is accompanied by a dark-haired, grieving woman assumed to be her aunt Karen. In all the painted versions Sophie is lying in a bed, obviously suffering from pain, propped by a large white pillow, looking towards an ominous curtain likely intended as a symbol of death. She is shown with a haunted expression, clutching hands with a grief-stricken older woman who seems to want to comfort her but whose head is bowed as if she cannot bear to look the younger girl in the eye.. I wonder in returning again and agin to this whether he was trying to return to that breakthrough moment in his artistic development or returning to that traumatic event through episode of survivors guilt and/or PTSD, or indeed whether he linked his creativity with that episode of loss and sorrow as many artists do, seeing creativity and suffering as inextricably linked. Did Munch and his family pray at this time? Was the woman in the painting praying or simply collapsed in despair? If they did pray, why did God not answer their cries for mercy, to echo the psalmist?
In the current crisis we have already read of at least one pastor who is recovering, and this is attributed to the power of prayer. But what of the others who are also being prayed for (including the Italian priests that I mentioned yesterday) but were not spared?
If the trajectory of this current crisis continues along the predicted course there may be many plunged into the depths of despair. The point of loss may not directly echo this painting: there may be no proximity between many loved ones at the point of death. Those who may die will largely (but by no means exclusively) be older people rather than young girls. But there is a real possibility that many will be profoundly traumatised by their experiences and losses. And survivors’ guilt will be a major issue for some. And this may manifest itself in many ways again and again in the years to come.
Art may be one response. Painting poetry, music, song… all trying to make meaning out of the pain.
It is interesting that this Psalm is one of the so-called “songs of ascent” variously thought to be a song that the pilgims sang en route to the different festivals, or perhaps a song sung as the priests ascended the steps to the altar. I prefer the former idea. That as the people trudge their way ever upwards towards Jerusalem they sing songs that are not just happy songs, but which acknowledge the pain of life, and God’s merciful presence with us in it.
As we journey on may we do so with such songs in our heart and on our lips.
PRAYER (from the Church of England Book of Common Worship 2005)
Father, we commend to your faithful love
those who are crying from the depths;
help them to watch and pray
through their time of darkness,
in sure hope of the dawn of your
forgiveness and redemption;
through Jesus Christ our Lord.
AMEN