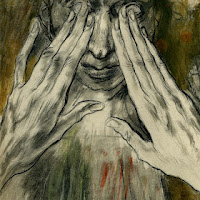 Unusually for this series of #LentArt posts todays was originally specifically created to illustrate a Biblical version. Eduourd Léon Edy-Legrand (1892−1970) was a French artist who specialized in creating illustrations for advertising and publishing. In 1950 he was commissioned to illustrate a new translation of the Bible by Robert Tamisier and François Amiot, including this illustration of Jesus Healing the Blind Man. I’m not sure exactly which healing it originally referred to but it could easily be one of those referred to in today’s gospel reading from the lectionary:

As Jesus went on from there, two blind men followed him, calling out, ‘Have mercy on us, Son of David!’
When he had gone indoors, the blind men came to him, and he asked them, ‘Do you believe that I am able to do this?’
‘Yes, Lord,’ they replied.
Then he touched their eyes and said, ‘According to your faith let it be done to you’; and their sight was restored. Jesus warned them sternly, ‘See that no one knows about this.’ But they went out and spread the news about him all over that region.
While they were going out, a man who was demon-possessed and could not talk was brought to Jesus. And when the demon was driven out, the man who had been mute spoke. The crowd was amazed and said, ‘Nothing like this has ever been seen in Israel.’
But the Pharisees said, ‘It is by the prince of demons that he drives out demons.’
Matthew 9:27-34 (NIVUK)
This image takes the viewer up close, cropping out all but the hands of Jesus and the face of the blind man. In some other healings Jesus does so by his word of command, but with the blind men in this passage he touches their eyes. Elsewhere he is even bold enough to touch those suffering from leprosy, something that is expressly forbidden in the purity laws of the Old Testament, laws which were not simply arbitrary religious laws but which had their roots in protecting people from possible infection.
Against the background of the current crisis this story and image is challenging if not disturbing. (SPOILER ALERT: that is also true with the readings for this coming Sunday)
I have been moved by stories of priests in Italy who have died because of their faithfulness in ministering to those who were sick and dying, and indeed by the story of the Christian Chinese doctor who first alerted the authorities in China to this disease and indeed was arrested for whistle-blowing when he thought that the government were not doing enough.
I have also, I’m sad to say, been disturbed by other brothers and sisters globally who have refused to comply with government guidelines and see their continued meeting as a witness to the power of God… or who have continued to do pastoral visits in like vein, in contravention of guidelines yet claiming the protection and indeed mandate of God.
Touch is a powerful, and often healing thing… And where it is denied it can have dreadful consequences.
But here and now, touch may be the very last thing that people need… We need to be very sure that what we are doing is healing or, indeed, to use an idea implicit in this story, and not a term I use lightly, demonic…
For the prayer tonight I have drafted a prayer shaped by the words of one of my favourite hymns by John Bell and the late lamented Graham Maule “A Touching Place”. Whilst looking them us online I found one site which had misquoted them. Where the song originally said “ Feel for the people we most avoid” this site had substituted “ Feel for the people we must avoid…” Particularly poignant.
PRAYER (based around the words of “A Touching Place” by John L. Bell and Graham Maule)
Christ’s is the world in which we move.
Christ’s are the folk we’re summoned to love,
Christ’s is the voice which calls us to care,
and Christ is the One who meets us here.
Lord, wherever is here for us, you meet us.
However we are feeling, you meet us.
Speak to us, speak through us,
Act through us to touch others

Feel for the people we most avoid.
Strange or bereaved or never employed;
Feel for the women and feel for the men
who fear that their living is all in vain.

Lord, in this time when some of us are told to avoid all contact,
And long for human touch,
While some are being asked to put their lives on the line by touching others
In order to bring them healing,
We thank your that you know how we are feeling
That you know our fears and want to bring us your peace.
Feel for the parents who lost their child,
feel for the woman whom men have defiled.
Feel for the baby for whom there’s no breast,
and feel for the weary who find no rest.
Lord, for those who have been bereaved
but cannot mark the passing of a loved one in the normal ways;
For those confined in homes that are not places of safety;
For those worried about where their next wage is coming from
To feed and house themselves and their family.
For those who are simply exhausted
We pray for them all.
May you touch and bring them your healing.
Feel for the lives by life confused.
Riddled with doubt, in loving abused;
Feel for the lonely heart, conscious of sin,
which longs to be pure but fears to begin.
Lord, this whole episode has left many confused and uncertain
About what to do for the best
For some it has led them to question your existence.
For others it has led them to want to get right with you
Because death has become an unexpected possibility.
We pray for them all.
May you touch and bring them your healing.
And we pray for ourselves
that we would hear your call to do what you would have us do
as your hands in this world.
To the lost Christ shows His face;
to the unloved He gives His embrace;
to those who cry in pain or disgrace,
Christ, makes, with His friends, a touching place.
AMEN
Shalom