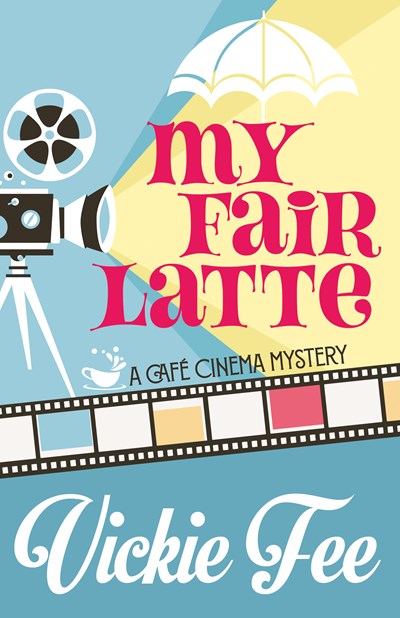 Vickie Fee gives us a fun cozy mystery with lots of friendly characters and enough suspects to keep the reader busy trying to solve the crimes before the author reveals the guilty parties.

Halley Greer has just inherited her Uncle Leon’s single-screen movie theater. The theater had seen better days – and now needed some work if it was to return as a functioning business. Halley Greer and the community of Utopia Springs AR were willing to invest their time and energy cleaning, painting, and re-modeling to make the space useable, if not quite up to its former glory. Along with classic films, Halley chose to make the theater a showcase of local cuisine – coffee, wine, bread, and pastries.

Opening night appeared to be a success. The three-hour movie My Fair Lady was the opening show, the theater was sold out, patrons were indulging in the available snacks, and Halley was excited. At least until the intermission – that was when the body was found sitting in the auditorium, the dead body.

The story held this reader’s interest. Suspects ranged from Halley to the son of the family who owned the Chinese restaurant. The police kept searching for clues – but it was the work of Halley and her friends that would finally allow the pieces to fall into place.

Though the community of Utopia Springs was nice, I was disappointed that the beverages of choice were beer and wine – though the theater had its own coffee bar and also served fountain drinks to those too young to imbibe. Coffee and soda were available, but we rarely see individuals drinking anything but beer and wine – lots of beer and wine. It would be enough to keep this reader from wanting to visit this tourist-centered village. And it is enough that this reader would not consider adding this book to his personal library. It is also why I would only give this book 3-½ stars.
______________
This review is based on a free electronic copy provided by the publisher for the purpose of creating this review. The opinions expressed are my own.