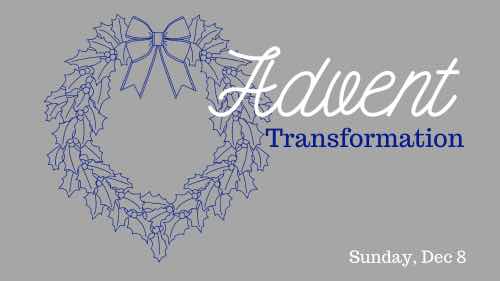 Let’s face it and I’ll just go ahead and get this out on the table.  Four weeks from now, only a few of us will actually still have that holiday feeling.  And the rest of us will either be exhausted from all the holiday rush, or annoyed that we have to climb back up that rickety attic ladder to get all those empty Christmas decoration boxes down.

Or at the very least, many of us will feel some of those post-holiday blues.

I shared this story a couple of years ago during a Christmas Eve service so for those of you who didn’t hear it, I’d like to share it again.

When I was a kid one Christmas, Santa brought me an electric football game.  Maybe some of you remember this large metal football field with the vibrating football players that rarely would go the direction you wanted them to go. 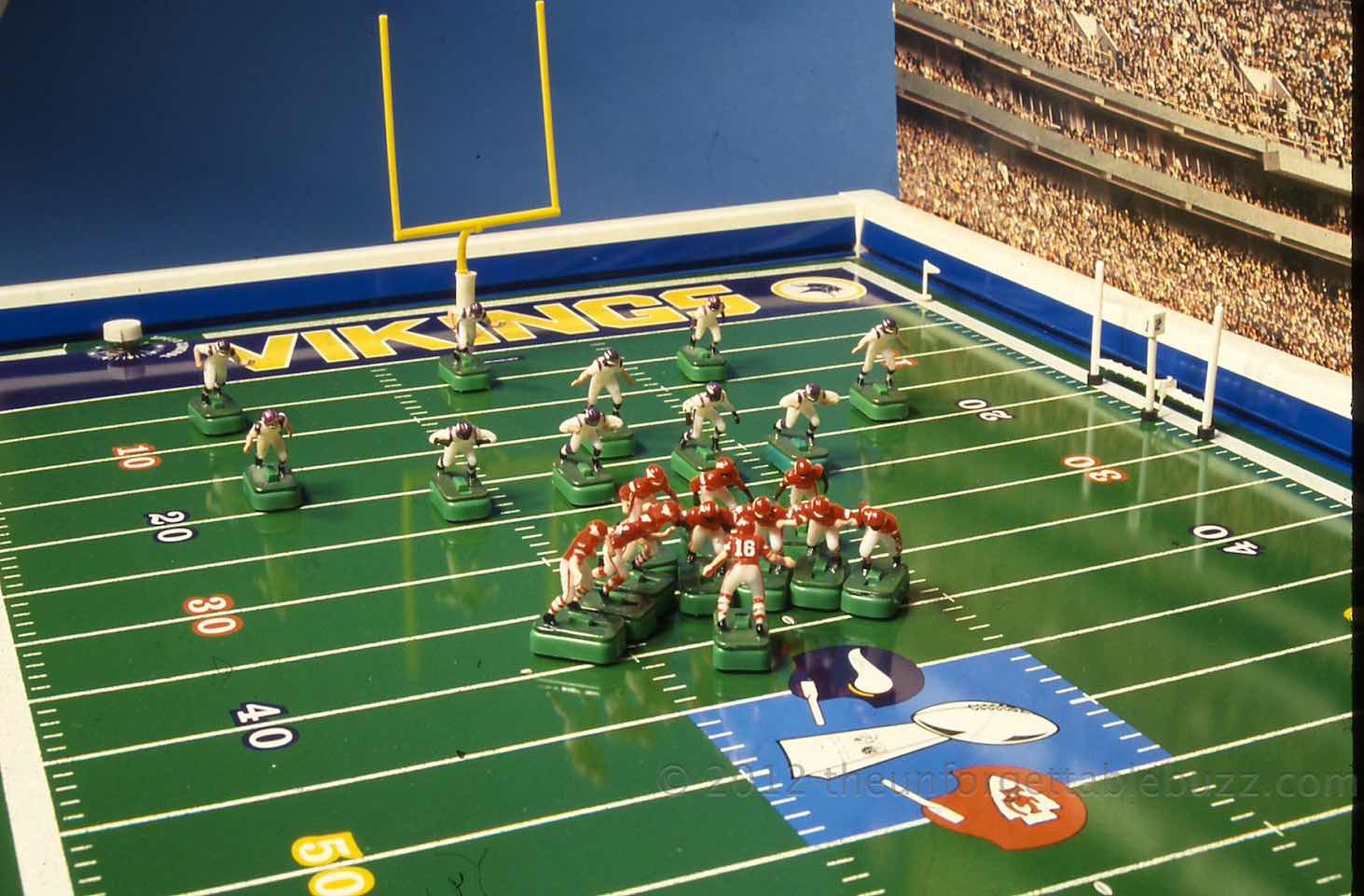 The commercial claimed that it would be just like a real NFL football game, only the players were plastic and the field was a sheet of metal.  But everything else was just like a Sunday NFL game.  They even had cardboard crowds that you could insert as a backdrop to make you feel like you were in a real stadium, complete with scoreboard. You kids now a days with your fancy video games. You don’t know what you are missing!

Do you remember how most of the scoring was done with this game?  It certainly wasn’t by touchdowns.  And my brother and I never quite figured out how to kick field goals with that little yellow hinged leg man and the microscopic size football.  Most of the scoring was through safeties because your player would start to go down the field but then turn around and head back into your own end zone.  One dust particle on that sheet of metal could make the difference between a 1st down or a 15 yard loss.

I’ll never forget this.  It was the day after Christmas, and a neighbor buddy of mine thought it was really cool that I got this game for Christmas.  It was a really close game and with time running out in a scoreless game, my little plastic NFL man was breaking loose for a game winning touchdown.

It was only one day after Christmas, and I had lost that holiday feeling.

The Season of Advent, these four weeks leading up to the Christmas season, is not meant to get us all excited about the holiday, only to leave us down and discouraged after all the decorations have been put away.

The Season of Advent is meant to have such an impact on our lives, that we will never be the same again.

Take for example our Gospel reading on this 2nd Sunday of Advent.  Notice that the focus isn’t on the manger scene at all – the focus is on a prophet like man getting people like us ready for the beginning ministry of Jesus.

John the Baptist is drawing great crowds to hear him preach and get this – he is nowhere near a Target or a Best Buy.  He’s in the middle of nowhere.  In this busy month of December, a wide open space of dirt and rocks is probably the last place that we would choose to go.  But this is where the action is on this 2nd Sunday of Advent.

John is baptizing people left and right and let’s just put it this way – he’s not spreading a lot of holiday cheer.  Instead, he’s saying to repent and prepare for one who is more powerful than he.

But isn’t it interesting that Matthew tells us that people were responding to John’s message?  And even the religious leaders were coming to be baptized and to be part of this interesting religious experience.

But that’s when the music stops.  Just when the religious leaders had jumped in line waiting to be baptized, John turns to them and refers to them as snakes and he challenges their motives for joining the crowd.

This text has always bothered me a bit, because at first glance, I’m thrilled that these religious leaders even showed up.  And notice that they didn’t ask if John was a properly credentialed licensed local pastor or if he had been through Lay Speaker training.

I’m impressed that they were at least willing to jump on the bandwagon and get an extra dose of religion.

And without holding back, John looks at those religious leaders and tells them, that the only folks who should wait in line by the river are those who really want to change.  “Bear fruit worthy of repentance,” John tells them.  “Think twice before getting dunked because your life will never be the same again.”

Well, that puts Christmas in a different light, doesn’t it, because Christmas is about top to bottom, outside/in, inside/out, long lasting, transformational change.  The kind of change that goes well beyond Christmas Eve.  It goes with us the rest of our lives.  Is that the kind of Christmas we’re hoping for this year?

I was talking to a church member following a forty day church-wide spiritual focus that we had just completed. The worship services, the sermons, and the small groups were all designed to lead us into a deeper and more profound relationship with Christ.

And this member shared something with me that afternoon at his kitchen that has stuck with me to this day.  He said, “You know, don’t you, that the 40 day study isn’t really over.  It’s just beginning.  Now’s the hard part.   We need to live out what we promised to do.”

John the Baptist would have said, “amen,” to that.

“Bear fruit worthy of repentance” John tells us in this season leading up to Christmas, because if you don’t, Christmas won’t really mean a thing.  It will just be another religious experience that gets boxed up and put back in the attic.

My book shelves are filled with notebooks from seminars I have attended over the years. I’ve stopped saving these notebooks because they take up so much space on my shelves so now I take notes on my laptop so I’m more likely to refer to them from time to time.  For some reason, when those hard-bound notebooks get stored on my shelf, I tend to forget about them.

I don’t want to store Jesus on a shelf and forget about him.  I want Jesus to live in me to shape and mold me to be the person he is calling me to be.   And that’s a life long process.  And that’s why the message of John the Baptist is so important for us today.  Don’t put Jesus on a shelf.  Repent and bear fruit worthy of repentance.

Charles Simeon was a student at Cambridge University in England in the 18th century.  During this time, students at English Universities were required to attend church regularly and to receive Holy Communion once a year.

As you might imagine, this requirement to attend chapel and receive the Sacrament had some negative effects because of the many students who attended for the wrong reasons – just to fulfill a requirement to stay enrolled in the university.

When told that he would be required to receive the Lord’s Supper during the middle of the term, Charles was faced with a dilemma.  He wasn’t a Christian and he certainly didn’t want to be a hypocrite and receive the Sacrament for the wrong reasons, so it was at that moment that he decided that if he must go he would repent, turn his entire life over to Christ, and become a totally committed follower of Jesus Christ.

That decision on February 2, 1779 literally transformed his life.  From that moment on, he dedicated himself to be a growing disciple of Jesus Christ everyday.  It’s a commitment he kept for the rest of his life.  In his journal, he wrote, “and so earnest was I in these exercises that within the three weeks, I made myself quite ill with reading, fasting, and prayer.”

Charles Simeon went on to become a chaplain of Holy Trinity Church in Cambridge where he faithfully served for 55 years until shortly before his death in 1836.  He was often criticized for the enthusiasm and zeal that he brought to his faith.

For Charles Simeon, it was all or nothing when it came to faith in Christ.

And this is the message for us from John the Baptist this morning. Are we all in? Will we allow this season of preparation to last longer than the Christmas break?  Don’t let Christmas be a holiday that simply comes and goes.  Allow the Christ of Christmas to change your life from the inside out.

Inevitably, in the middle of January, we will no doubt see a house here and and there that will still have their Christmas lights up.

Even in the beginning of February, you might even see a Christmas tree with lights flickering through a bay window.

But the more important question for you and me in this Season of Advent is – once the decorations are put away, the broken toys are pushed toward the back of the playroom, and the clothes that don’t fit are returned, will the light of Christ still be shining brightly through you and me for all to see?

And the answer to that question depends on how deep into the Jordan River we’re willing to go.

Advent Transformation
Sermon Discussion Questions
Matthew 3:1-12
December 8, 2019
The Season of Advent is meant to prepare us for the coming birth of Jesus Christ AND to live out the good news of Christmas well beyond the holiday season. Today’s focus on John the Baptist and his call for transformation reminds us to begin making changes now so that our faith will continue to grow even beyond the celebration of Christmas. His call for us is to “bear fruit worthy of repentance.”
What kind of “fruit” do you think is connected with “repentance?”
Pastor Robert shared the story of Charles Simeon who was a college student in England back in the 1700s. He wasn’t a Christian at the time, but was required to attend chapel services and receive the Sacrament of Holy Communion. Not wanting to be a hypocrite, he decided to give his life to Jesus Christ. He made it a daily habit to read the Bible, fast from meals, and pray. As he experienced transformation through his new-found commitment to Christ, he responded to a calling to become a chaplain, serving the church for fifty-five years! He was often criticized for the enthusiasm and zeal he brought to his faith.
In what specific ways is God calling you to take your faith to a deeper level during this season leading up to Christmas and beyond? What do you need to change in your life to help make this happen?