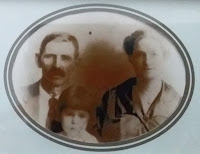 The second part of a short series telling the story of my Dad, or at least part of it… The somewhat sun damaged photo here is the only one I have of my grandfather Samuel Robert Campton, his wife Edith (nee Crooks) and my dad’s eldest sister Louise in America.

One of the things that stood out in both of the Thanksgiving Services on Tuesday that prompted this series of blogs about my dad, were the two poignant and amusing tributes delivered by members of their family. None of our family felt able to offer a personal tribute at either my Mum’s or Dad’s funerals.

I have said time and again to families for whom I have conducted funerals (and there have been many… too many), that whilst it is lovely to have family participation, and especially a family tribute or eulogy, I do not underestimate how difficult it can be, because despite my skills and profession I wasn’t able to do it for my own parents. I have conducted a few other family funerals and that was hard enough, but I, and my 3 brothers, were glad to entrust both services to ministers who knew my parents well, and who listened well to us telling stories of them both beforehand, so that they were able to weave more personal anecdotes into their funeral addresses. The minister who conducted my mother’s funeral, the Rev. Dr. Brian Fletcher, who was the minister of the church that my mother took me to for most of my childhood, Sydenham Methodist, is probably the minister who shaped my approach to pastoral care and especially the conduct of funerals more than any other, though I am a pale imitation. He however, only conducted the service in the funeral home. It was my father’s then minister who conducted her cremation. My father attended a different church from my mother, myself and my younger brother for much of my childhood and youth, but more of that anon. It was from this minister that I learned the most important lesson in conducting funerals. GET THE BEREAVED’S NAME RIGHT! All through the (blessedly brief) cremation, he referred to my mother as Kathleen, my mother’s middle name, which NO-ONE, ever called her by… I was fit to be tied by the end of the service and was ready to eat the said gentleman alive, but thankfully my wife and my frequently equally headstrong brothers talked me out of having that conversation. But from that day to this I have always checked and double checked the names of the bereaved and their families, not just their given names, but those they are known by in and out of the family (and it is amazing how many times people operate under different names in different surroundings, like people with assumed secret identities), making sure that they are written down in a script that is equally written in full. And because of that, to my knowledge, (although there could be a family out there still seething at my mishandling of their grief), I have only once gotten the bereaved person’s name wrong, but it was in a week of multiple funerals when, it turned out, I was developing viral meningitis – and the family laughed openly at my obvious mistake which I quickly corrected.

There was no such mistake at my father’s funeral, which was, as I said, sensitively conducted by the new minister at his church, a near contemporary of mine when we Methodists used to study with the Presbyterians at Union College. There may have been plenty of scope for such a mistake however, because whilst my father’s name was officially Thomas James Campton (and seems to have been recorded as such on all official documents) he was variously known at work and elsewhere as Tommy, or occasionally TJ, but at home as Jimmy, unless my mother was annoyed when he (and any of the rest of us) got his name in full. I make a point of saying that all official documentation seems to be in the same name, because that is almost unique among my father’s family. He was the only boy in a family of 7 born to Samuel Robert and Edith Campton, but the girls were registered at birth under a range of names including Kempton and Compton. I only discovered the second of those yesterday when I started digging again into a few of the bits and pieces of family history I have accumulated over the years… discovering that one of my Dad’s older sisters and her parents were registered in New Jersey, USA at one point under that name, although I have been bedevilled with people calling me Compton for most of my life. I have also had Crompton, Trumpton, Captain and most unfortunately, Crapton, but not, to my memory, Kempton, which ironically is likely to be the original spelling of the name, with our variation being a product of the local dialect in the area where my Dad was born near Cookstown in County Tyrone. In that area there is little audible difference between the word for cows in a field (cattle) and an implement for boiling water (kettle), and the wider family in that area is split between those who spell the name with a Ke and a Ca…

There is a family legend that my grandfather was illiterate, and when it came to claiming welfare support in the hungry 30s he asked which spelling of his name got him higher up the list… Hence the CAampton… He certainly seems to have been illiterate as his name was marked with an X on the Ulster Covenant in 1912… Although there even questions about that, because I learned recently that he went to the USA in 1907 (under the name Campton), although family legends claim he went out immediately after the Great War. Did he return to Ireland after that first visit in time to sign the covenant, going back to the US later, or did someone forge his “signature”? However, and whenever he went to America, he eventually ended up in Pittsburgh, where he met a woman called Edith Crooks, who was actually a cousin, not unusual back then. They married and had 3 daughters, Louise, Annie and Sylvia, all registered in America, as either Campton or Compton.

I’m told that Edith would happily have remained in the US but they were summoned back to Ireland, or rather Northern Ireland as it had become in their absence, to manage the small family tenant farm on the death of Samuel’s father. Again family legend tells that Thomas James Campton was conceived in America but born on 14th May 1924 at Dunmore, in the townland of Lissan, outside Cookstown, Co. Tyrone. His birth was followed by that of 3 younger sisters Winfred, Lucy and Mildred, variously registered at birth and baptism as Campton or Kempton, with only Mildred still alive in Melbourne, Australia, where she went to live with her husband Sammy Kell.

So not only could my father, have had a different surname he could have had a different nationality if he had been born slightly sooner. How different would his life have been? That is one of the great imponderables? Does our name or our environment shape us more than our genetic make-up? Could Thomas James Campton, Compton or Kempton have risen to the dizzy heights of President like the current inhabitant of the White House who was also the son of an immigrant? Or is it all planned out for us in advance? After all, unlike myself, my Dad was a Calvinist… But more of that anon…