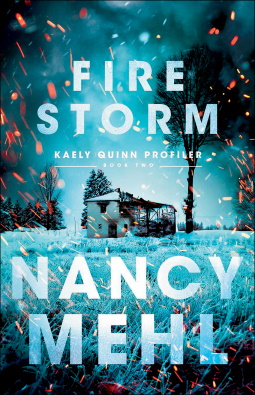 Fire Storm is the second book in a series featuring Kaely Quinn, trained as a profiler, but because of her irregular methods is currently serving as a special agent out of the St. Louis, MO, office of the FBI. Though there are many who question her methods, her supervisor, SAC Solomon Slattery, has grown to appreciate the skill and talent she brings to her work with the FBI.

Though the relationship she has with her mother is not great, Kaely Quinn still wants to make the effort to travel to Darkwater, Nebraska, before her mother’s health deteriorates. She has been granted time off and as the story begins, we find her on the road to her mother’s home.

Stopping at a small diner to eat before going home, Kaely picks up a local paper and is intrigued by the front-page story that describes a series of fires that have hit homes in Darkwater. The local fire chief attributes the fires to misused space heaters. Kaely’s intuition tells her something more sinister is going on.

During the course of the plot, we watch the faith of three characters being challenged as they and the local police and fire departments seek to identify the arsonist that is attacking families in the Darkwater community. Jason, Kaely’s brother and most solidified in his faith is not immune to the pain around him. Kaely’s faith is growing but finds it challenged as she faces her mother and the arsonist. Noah, Kaely’s FBI colleague and partner (and boyfriend?), is the youngest believer in the group and is watching the others as they respond to their faith.

The book will easily find a home in the church or public library. Its intensity matches that of criminal minds and fits naturally after Nancy Mehl’s earlier Mind Games.
______________
This review is based on a free electronic copy provided by the publisher for the purpose of creating this review. The opinions expressed are my own.