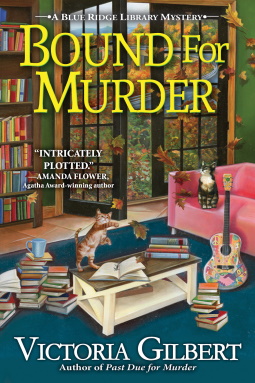 The small town of Taylorsford, VA, had its share of shady characters. Many arose from the small commune that had its origin and downfall during the ’60s on a farm located on the outskirts of town. This was of course escalated by the drug culture that was part of commune life. But now some of those shady characters were grown up and running for public office. Some were returning to visit friends. And there were those who were returning for murder.

Much of the story focuses on the town library and its librarian, Amy Webber, and a forty-year-old murder associated with the members of the commune. The more Amy discovered about the commune’s history, the more dangerous life became for her and her friends. Time was running out before there would be more murders.

The author has built an enjoyable cozy mystery that easily holds the reader’s attention from page 1 to the last sentence. Though there are two cats woven into the story, there is no library cat. But even without the cat, the book was an enjoyable read.
______________
This review is based on a free electronic copy provided by the publisher for the purpose of creating this review. The opinions expressed are my own.