Scouting Banquet
OU Inn
April 25, 2019
Rev. Robert McDowell
Thank you for inviting me to talk with you tonight about the positive impact that the scouting program has in our communities. I must admit though, that I feel a little out of my element in sharing with you tonight.
For example, as a pastor, I’m not used to so many people sitting in the front seats like this. That’s really different for me and it’s kind of throwing me off my game. I think you should get an award or something for sitting up here. Let’s have a hand for the front seat people. So brave of you!
I also want to temper any expectations you may have about my message tonight because I used up all my best material for my Easter sermon last Sunday. It’s usually not a wise move to ask a preacher to speak at an event immediately after Easter Sunday. We only have so many good illustrations. So basically, you’re just going to get last Sunday’s Easter sermon tonight. Just kidding.
In all seriousness, when it comes to scouting, I have more than enough heart warming material to share with you. So, the first thing I did when I was invited to speak tonight was to ask some people I know what scouting has meant to them.
That’s what I have learned about being a preacher, by the way. Preaching is really just me as the preacher sharing other people’s incredible stories of faith with the entire congregation, with permission of course. And I get to sprinkle in my personal stories as well. And waa-laa, when you do all of that, you will probably end up with an above average sermon. It’s actually a little more complicated than that but that’s not too far from the truth.
The stories of how scouting have made our communities and world a better place are all around us. I’m just going to share some of these inspirational stories and experiences about scouting with you.
Someone was telling me about his aunt who was vacationing in England and taking a tour along with her friends of all the old castles along the canals.  They had rented a long and narrow boat for this.  One day their motor stopped.  There were many other boats going both ways on the canal.  Nobody stopped to help them in their distress, except for one group. I’ll give you one guess who.
That’s right. They were Boy Scouts and they were able to get them going again. The people in that boat were so grateful. They will always remember these scouts who rescued them and got their boat to safety.
Recently I was reading about three marines who were killed a couple of weeks ago while serving in Afghanistan. The news article caught my eye because one of the marines is from my home area in south central, Pennsylvania.
I kept reading the article which led me to the second marine who was killed on that same mission. The name of this second marine is Staff Sgt. Christopher Slutman who graduated from a high school in Maryland where he was an Eagle Scout.
He resided in Newark, Delaware with his wife and three daughters. He was a New York City firefighter with Ladder Company 27, The Bronx, and was credited in 2014 with saving a woman’s life. “He represents the very best of us, all the bravest of the brave,” said FDNY Chief John Sudnick. It’s not uncommon to come across news stories like this that remind me of how scouting develops young people to be leaders who end up making a positive difference in our communities and world.
Speaking of scouts who save lives, in one of the churches I served as pastor, two of the Boy Scouts from the troupe we chartered were also members of my church. They were coming home from school one day and I don’t remember too many details because it’s been approximately fifteen years ago. But as they were coming home from school, they used their first aid training to save a woman’s life. They were fortunately in the right place at the right time. But the story continues.
Two years ago, one of the those two scouts, Eric made the news again in that same local paper. Now in his 30’s, he was featured in an article for helping to organize four to five truckloads of supplies from the Dayton, Ohio area to help the victims of Hurricane Harvey down in Texas.
They partnered with two of the local car dealerships in their community who let them use some of their trucks. They loaded those trucks with water, blankets, food, baby supplies, clothing, toiletries, and other flood relief items. Once a scout, always a scout in doing good for your community in these selfless ways.
A former Boy Scout Master attends my church. And we were talking one day and knowing that he is very passionate about scouting, I asked him about his Troupe which he had back in the late 80s and early 90s.
He said that he had four scouts in his group including his son and they were all good friends growing up and they have all done well for themselves. I’m guessing that you might recognize one of these four scouts from that Boy Scout Troupe. You might know him as Dr. Sergio, an orthopedic surgeon here in our town. I told my church member, the former scout leader that he must be proud to know that he helped to influence these young people’s lives.
I share these stories about scouting to remind us of the positive ripple effect that scouting has in our community.
We are honored at Athens First United Methodist Church to be a charter organization for Boy Scout Troupe, #71. They have their meetings at our church on Monday evenings and are consistently asking me, “How can we help your church? Is there anything we can do? Just let us know.” 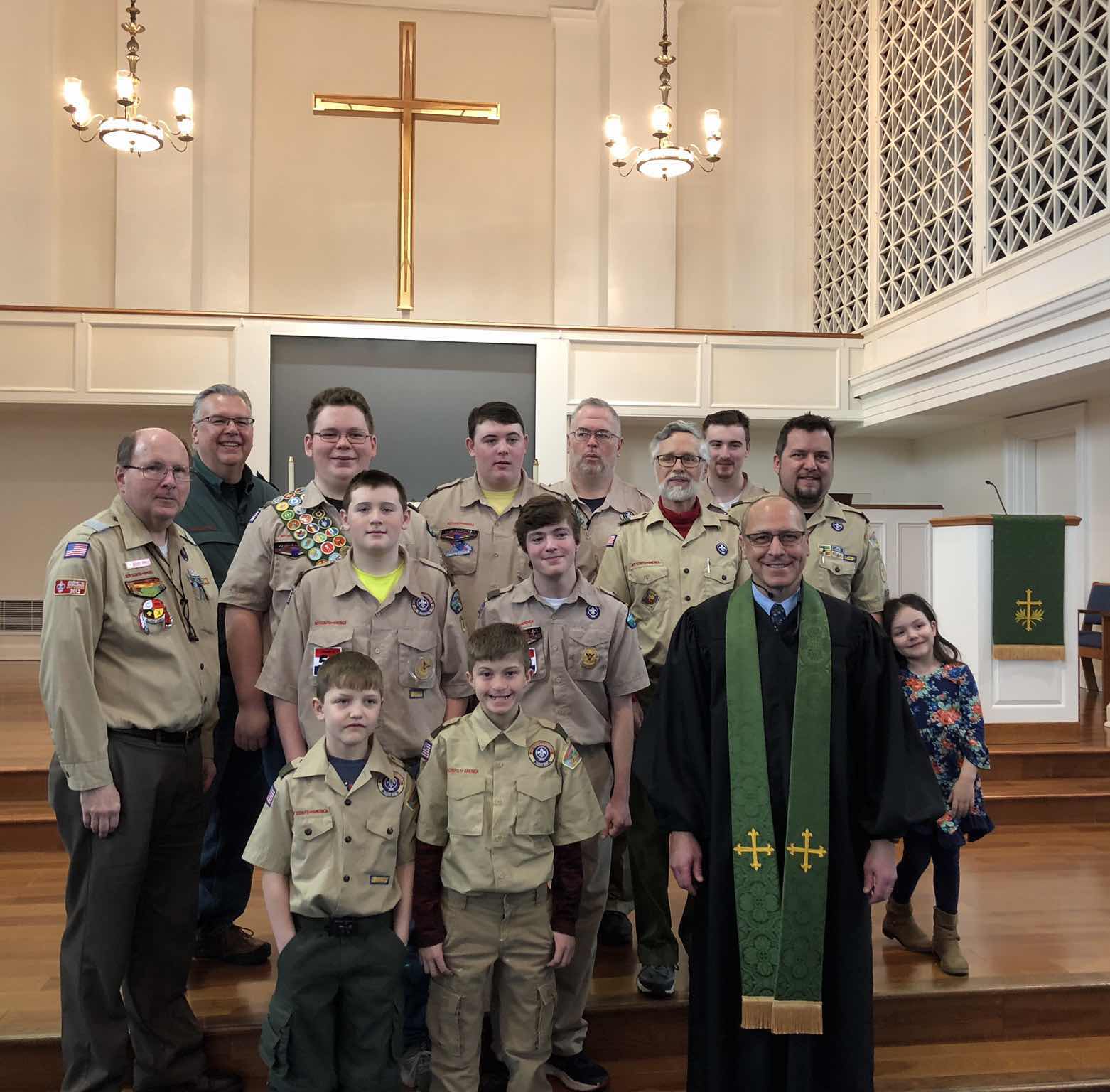 I’ve been at Athens First for four years now, and it’s amazing how much they have done for us just since I’ve been here. They have cleaned “hard to reach” windows, picked up trash around the church, weeded and mulched, painted, helped lead worship services, and just a couple of weeks ago, they saved us a lot of work by helping to clean out one of our storage rooms.
They’re hourly rate is very reasonable. $0 an hour. I tried to negotiate that down but they said that’s the best they could do. And they do all of this helpful work with a great attitude and a positive spirit. What else would you expect from scouts?
But let me share my favorite thing these Boy Scouts did for our church. Athens First is located along College Street, just across from the city parking garage and so we have a lot of people, especially college students who walk by our church on a daily basis.
If you have been by the front of our church the past few years, you probably have noticed that a large prayer cross is mounted in front of our church entrance. This white cross has two metal boxes attached in the middle of where the two cross beams meet. 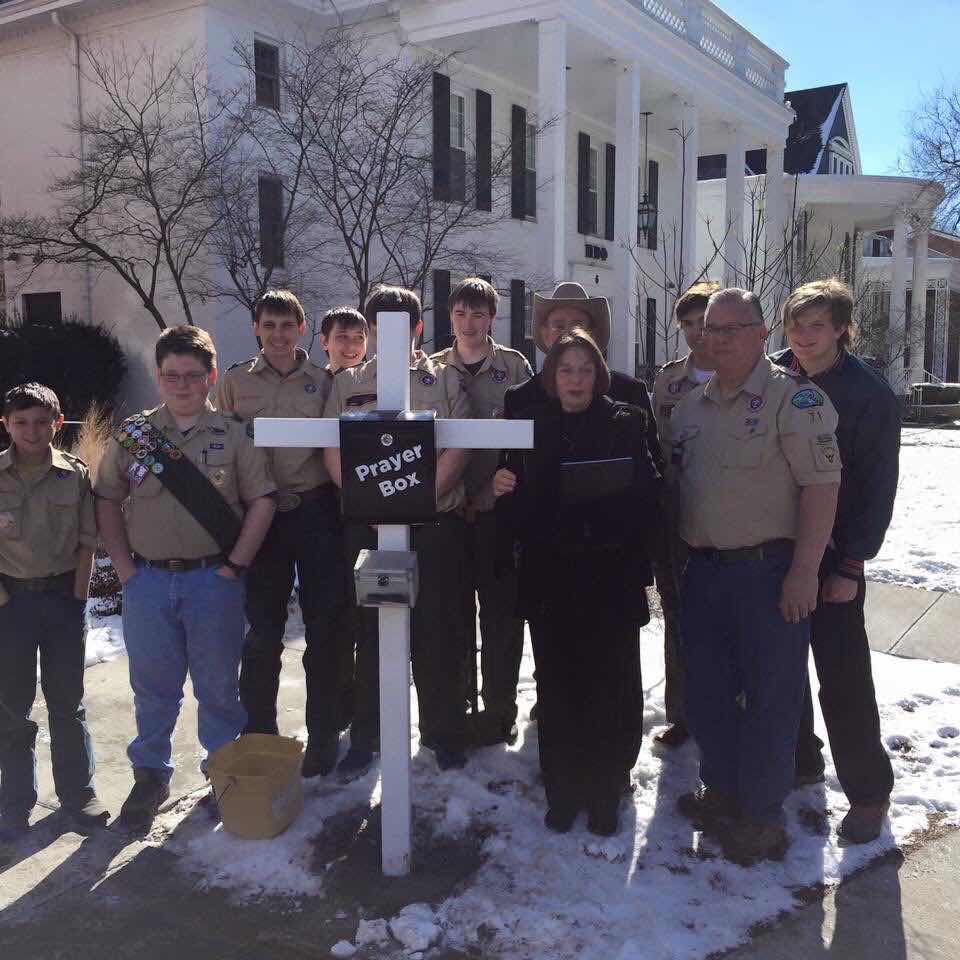