The following is a list of pictures of me in my High School and College yearbooks from the 1980s, excluding the standard yearly posed picture… 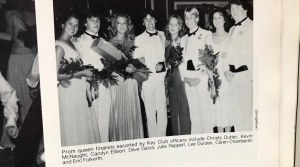 Important aside to this post…
None of this takes away from the even very serious allegations against Justin Fairfax. “I believe the women,” and I hope these allegations are thoroughly investigated. It sounds like he should step down, to me…

But, as a White male who was in high school and college just after the time of Northam,’s “incident,” I am more fascinated and stunned by HIS story. But not at all surprised.

I can recall a frat party at SMU during my seminary days, where all the kids dressed up as (and this is their words) “Wetbacks.”

I am sure this kind of thing happened at UT too.

But! I was shocked about it *then,* and so therefore unsurprised by it now. I am not at all claiming that I never said or did anything offensive. (more on that, momentarily…)

Some say everyone is being too hard on Northam.

But remember: His picture is from the mid 19-EIGHTIES.
Not mid-1950s.
Within just a few years of all the pictures I list above. 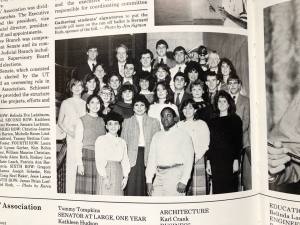 Which brings me to a story I always remember about my dear mentor, Rev. Bill McElvaney.

As many will recall, Bill was a lion of social justice. Bill was/is beloved by many African-Americans in Dallas for his ministry and solidarity with them. He was the *only* White preacher to march with MLK’s “Poor People’s March” — from Grand Prairie to Dallas— when it came to our area in the late 1960s.

That was the Bill most folks knew.

What Bill also used to regularly admit and confess was where he came from.

Bill was raised in Highland Park. His undergraduate years were at SMU, and he was a KA there. Bill would tell how he had, as a young man, stood in the middle of a fraternity meeting one night, and publicly defended the frat’s ban on black members. He had planned out his defense, and he had passionately advocated FOR the segregation of his fraternity in that very public way.

I would guess that most folks who knew Bill (perhaps some of you?) would be shocked to hear this.

That was the Bill of the 1950s.
A decade later, he would be that lone White preacher, marching in MLK’s “Poor People’s March.”

Bill would tell this story to make a point: It’s not where you’ve come from, it’s where you end up, and how honest you are willing to be about who you are, and who you’ve been.

To those who argue that we are being too hard on White folks such as Northam, I think the answer is:
“No…just on those who never acknowledge their own pasts or talk about how they’ve changed.”

Bill told this story because he understood that all of us, as White people, very likely have things in our past that we ought to confess, or acknowledge. And that very acknowledgement of it was a part of what made him “trustable” to African-Americans.

People CAN change. People DO change. You don’t have to wear your past on your sleeve, but it’s never a good idea to hide it, either.

All us White men of today would do well to take that same journey.

Said in the language of the day, we all most certainly have the “White privilege” of a society whose laws have favored us and our ancestors, and who blessed us with a kind of White affirmative action that has systematically given us a leg up on most African-Americans.

Even if we have not committed overt past-acts like Northam or McElvaney, we have benefitted from this system over generations. Our ancestors benefitted. All of us, even poor Whites, Northern Whites, non-slaveholding Whites. (If you wish to argue with any part of this paragraph, I’d invite you to at least listen to the “White Affirmative Action” podcast from “Scene on Radio” before responding…)

Certainly, Northam had ample chances along the way to self-confess…as Bill did…to his own racists actions in the past.

But he never did. And that’s why folks are justifiably troubled. Not that White men have to be perfect, and be without blemish. They don’t, and they can’t.

But that kind of picture (and nickname) in a yearbook conjures up the very embodiment of the White privilege I have just described. It cuts the legs out from under the trust of others.

What matters is where we end up, and the particular “sins” we are willing to confess and own. Bill named and claimed his own past as “sin.” He described it as sin.

He told the story about the fraternity meeting, to illustrate his own journey of “repentance;” which does not mean “feeling bad,” but simply “turning in a new direction.”

He told it humbly, in order to invite other White peoiple to the same work and journey. This is the work God did in him, and he had a firm belief that God called all of us, as White people, to a similar journey.

As a White guy from North Dallas, Bill’s story had a profound and life-changing impact on me.

To my knowledge, I don’t have any Northam-like moments I can recall. But given where I grew up, I would not be surprised to hear that once-upon-a-time I said or did something offensive.

I say this, because as I try to live more aware to my privilege, I still sometimes see ways in which it flares up. I can look back at my past and see examples of things I have done as a younger man (interactions with the police, for example) that I now realize stand as proof of my privilege then and now.

So, I *do* acknowledge the sin of White privilege and seek to live in a new way as an especially privileged White male today.
It’s a form of repentance too, just as sure as Bill’s journey was.

I’m sure I’m not perfect at it. And, no, it doesn’t make me “better than” anyone else. No, I am not claiming any kind of super-moral superiority. Nor does it mean I am turning my back on my own history or “people.”

In fact, quite the opposite.

Perhaps the way to describe it is: the attempt to be “self aware” and willing to continually confess and admit my privilege as that awareness comes to me.

It’s a part of a continuing repentance that I’ve been engaged in since just after all those yearbook pictures were first snapped, decades ago now. In the late 1980s, just after all those shots, my entire spiritual and political world-view changed, to the awareness I have just tried to describe. And I started a journey of life-long repentance, led by the spirit of God.

I hope and pray that White men continue to make that journey too, and are willing to acknowlege either their overt past acts, or their continuing privilege.

My eyes continue to be opened to racism, day by day, in ways that are not always easy…but are always a blessing of God.

*Note: ONE, just one, African-American on the UT Student Senate that year….