To follow is the manuscript of my sermon on Sunday, June 21, 2015.  Not only was it Father’s Day, but it was also the day after our community welcomed 10,000+ guests for the Gentlemen of the Road music festival.  But more important, it was the first Sunday following the Charleston massacre at Emmanuel AME church.

(Please note this is my preaching manuscript, which was written for the ear, so punctuation is not perfect)

35 Later that day, when evening came, Jesus said to them, “Let’s cross over to the other side of the lake.” 36 They left the crowd and took him in the boat just as he was. Other boats followed along. 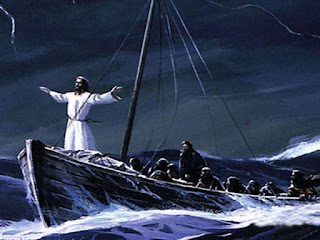 37 Gale-force winds arose, and waves crashed against the boat so that the boat was swamped. 38 But Jesus was in the rear of the boat, sleeping on a pillow. They woke him up and said, “Teacher, don’t you care that we’re drowning?”

39 He got up and gave orders to the wind, and he said to the lake, “Silence! Be still!” The wind settled down and there was a great calm. 40 Jesus asked them, “Why are you frightened? Don’t you have faith yet?”

41 Overcome with awe, they said to each other, “Who then is this? Even the wind and the sea obey him!”

I would love to take a pass this morning – we’ve had a long weekend…we’ve welcomed 10,000 or so guests to our community – we’ve dealt with re-routed traffic – and as a church we offered hospitality to literally hundreds of people over the past 3 days. We have been blessed to be a blessing…we truly live in a wonderful community. We have seen the very best of humanity – and that is something to cherish and celebrate.

A nice, simple message about Jesus taking care of us no matter what the storms of life may be would make sense – would be lovely – and would fit in well with what many of us have experienced in our lives. We’ve all known days of joy – as well as days of trials and tribulation

Or I could preach about Father’s Day….maybe I should do that…

But truth of the matter is that I am sick – and I am tired – and the Holy Spirit will not give me a pass, not this Sunday.

This Sunday I have to hold the newspaper in one hand and the Bible in the other – in tension with one another – because when you get right down to it – there is nothing simple about Jesus or his message of radical love, peace and justice. Making nice isn’t going to cut it

I have never been to Columbine, Sandy Hook or Fort Hood Texas – but Charleston – I worked in North Charleston for a season of my life – I know and love this community… the news of the tragedy there this week…makes me deeply sad. 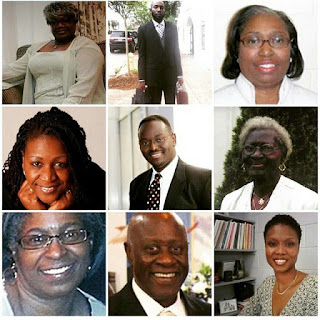 Enough is enough – we have to say it together, friends –

Enough is enough – not only are we fellow citizens of a wonderful country – but we are first and foremost citizens of the kingdom of God – a kingdom centered on the goodness of God’s creation – a kingdom that says that we – you and I – are created in the image of God, we are bound together by a sisterhood and brotherhood based not on the color of ones skin, but on the compassion in ones heart – a kingdom that was built on these powerful words from Jesus’ first sermon – reading from the Gospel of Luke chapter 4 – beginning with verse 16:

Jesus went to Nazareth, where he had been raised. On the Sabbath he went to the synagogue as he normally did and stood up to read. 17 The synagogue assistant gave him the scroll from the prophet Isaiah. He unrolled the scroll and found the place where it was written:

The Spirit of the Lord is upon me, because the Lord has anointed me.

He has sent me to preach good news to the poor, to proclaim release to the prisoners

and recovery of sight to the blind, to liberate the oppressed, and to proclaim the year of the Lord’s favor.

He rolled up the scroll, gave it back to the synagogue assistant, and sat down. Every eye in the synagogue was fixed on him.  He began to explain to them, “Today, this scripture has been fulfilled just as you heard it.”

This is the basic message of Jesus’ ministry –

offer good news to the poor, proclaim release to the prisoners,

recovery of sight to the blind and liberate the oppressed!

And it was lived out in his life, death, resurrection and ascension into heaven – and in the outpouring of the Holy Spirit at Pentecost – and we – as sisters and brothers in Christ, bound together by virtue of our baptism are called to continue his work – because the Spirit of the Lord IS upon us – and we, you and I as Christ followers, have been anointed to…

preach good news to the poor, to proclaim release to the prisoners

and recovery of sight to the blind, to liberate the oppressed!

We know these things…we really do…and Charleston is so far away, whatever could we have done to stop such senseless violence?

And yet, my heart is broken – not only by the events in Charleston – but also – because of events closer to home.

I have heard about the contentious Waverly City Council meeting last Monday night. Words slung like weapons – singling out – these people – or those people – hateful words such as those have no place in our gatherings, let alone in our City Hall.

As people of faith we have to say enough is enough!

As people of faith we have Jesus as our guide – all people – are God’s beloved – all people are valuable and have something to contribute – and all people come under the protection and love that we, as United Methodists, call – Prevenient Grace – the love and care of God before we are even aware of God’s love, mercy and grace – offered without cost – freely, freely it is given….

What are we doing friends? How could we have gone so astray????!!!

I think a lot of the issues we stem from the same issue the disciples were facing in that boat that night…fear….

Tired from a full day of traveling around Galilee with Jesus – they set out on a boat to cross the lake – Jesus, fully confident in the skills of the disciples – half of them were fishermen after all – immediately curled up in the back and went to sleep –

But as storms are wont to do – the winds kicked up – and the waves started breaking over the side of the boat – and the situation got away from them…and they were afraid…not just afraid – they were terrified – surely they were about to die!

I don’t blame them – we are wired, as mammals – to respond to frightening situations with a fight or flight instinct –

And the disciples knew this…and yet, they still cried out –

Jesus, Master – do you not care that we are perishing? We will surely die!

God cares – and as people of God, we must care too.

Reverend Emily Scott, pastor of St Lydia’s church in Brooklyn, writes about this passage from the Gospel of Mark and about how important it is for each of us to stand up and speak out for justice, civil as well as moral justice…she writes…

In Biblical literature, the sea is where the great chaos monster resides, and going out upon the sea is to be subjected to that fear, that chaos — the closeness of everything we cannot control.

And this week, as we have seen, in the refuge of the sanctuary, in the midst of prayer, by a young white man who has made hatred and white supremacy the center of his belief system.

People of color live life in the midst of a storm that they cannot simply step away from our out of. As white people, we have the privilege of seeing the storm from the outside, stepping away when we choose.

But Jesus is in the midst of the storm. He’s standing next to those who have been weathering it for a long time. And our job, plain and simple, is to follow Jesus.

In the name of God the Father, The Son and Holy Spirit. Amen.